Thank God I...Found The Real Me 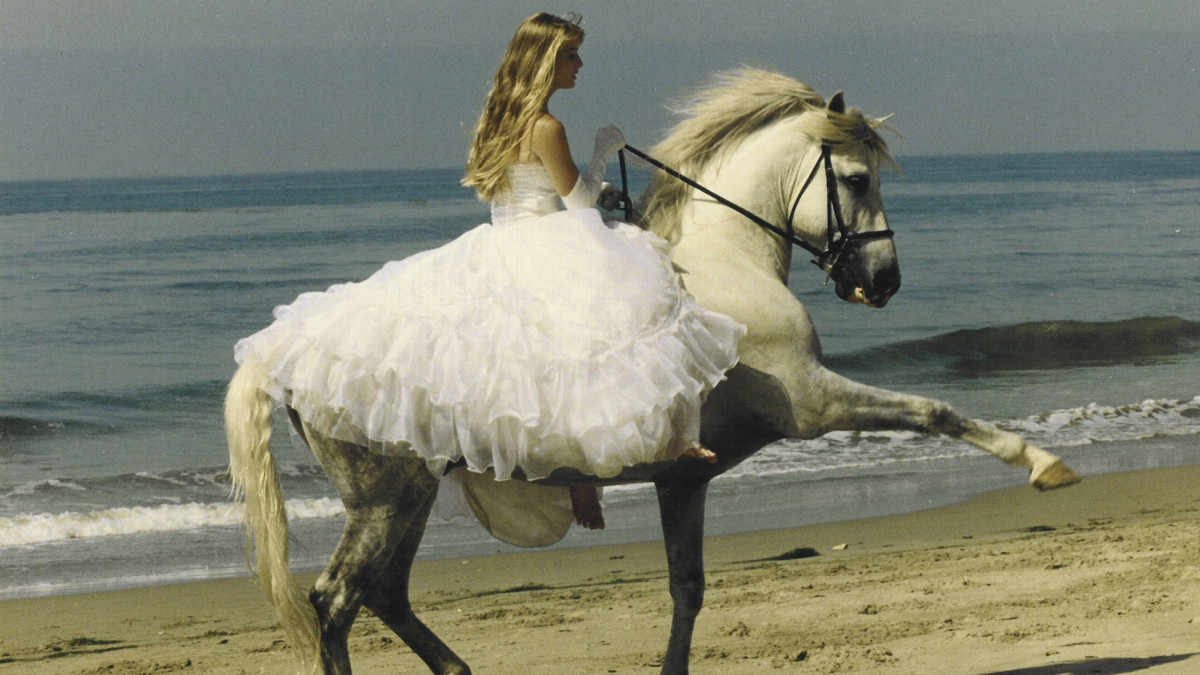 Faith Deeter, MFT, is a licensed therapist, author, speaker, and certified trainer. In 2003, she founded Galloping Thru Life therapeutic riding program. Today, Faith teaches relationship courses at a federal prison, has lectured at Johns Hopkins University, and offers personal development training. She is the author of ‘The Conflict Pattern Revealed’ and ‘Live Aligned With The Real You’. Her work has been featured on numerous radio shows and in print publications.

I was born premature but healthy, and my parents named me Faith. My growing up was basically normal, and then at the age of twenty, I was diagnosed with Hodgkin’s Lymphoma cancer. The cancer came with a single message: Be real, be on the outside who I truly am on the inside.

That’s why I pulled off my shoes before sliding over the glossy, smooth back of the white stallion. It just seemed like the real thing to do. The white prom dress I was wearing was arranged in huge ruffles around me. I moved my horse into the surf and galloped bareback over the wet sand while salt water sprayed and his hooves splashed and pounded. My mother took photos. The next day, week six of chemo, I would cut off my hair and keep it. Rather than lose my hair, I would cut it and store it in a box in the closet. But today, I would not think of any of these things. In this moment, gliding along the shoreline in the sun, I was happy. It was a time in my life when things were crystal clear, and for a short time, I knew the meaning of my life. I knew what mattered to me, and I knew what didn’t. I knew my capabilities, and I knew my limitations. I knew exactly what I wanted to do and nothing could stop me from doing it. No risk was too great. No embarrassment too daunting. No cost too high. In fact, there was no cost in doing things; there was only cost in not doing them. My entire perspective on life changed instantly, and I found a new alignment.

I dared to do things I never would have done before because all of the sudden time mattered.

The alarm of imminent death became a great gift for propulsion for living. It seemed like no accident that just two weeks prior I had read the book Illusions, by Richard Bach, and learned that what I had believed were limits were not limits at all. When compared to death itself, fears I had allowed to control me vanished. What others thought of me was no longer relevant. I dared to do things I never would have done before because all of the sudden time mattered. Time mattered, other people mattered, and for the first time in my life, I understood just how much I mattered. But why I mattered was the surprising thing. Bald and waif-like, I was no longer beautiful. Weak and weary, I was no longer athletic. Drugged and bedraggled, my memory was so impaired it felt like a dream that I had ever been smart. Compared with what I had been able to achieve just a few months prior, I was essentially useless, so why I mattered turned out to be a simple and pleasant surprise.

I mattered because I was alive and for no other reason than I was me and alive. I was the only Faith that would ever live and the only one that could fulfill the unique potential of my life. When I was young, my piano teacher referred to me often as her ‘unlimited potential gal,’ and ill, weak, and weary though I was, I finally understood the potential innately available within me — potential I did not have to earn and potential that would never go away despite my circumstances. A simple and profound gift came in knowing that my primary purpose in life was to simply be Faith, and to truly be Faith, what I had to do was be real; be on the outside who I was on the inside, and the rest would simply unfold.

Being real, however, did not always make other people comfortable. Still in college, I registered for classes, and too weak to stand, I sat in line and scooted forward. Others looked on with uneasy glances, but that didn’t bother me. I took a simple class, The Psychology of Women, and when I refused to go along with the teacher’s position that all women are victims, my journal came back with the following comment, “You are dangerous.” The label stung. A friend of mine cautioned me, “When one person’s thinking gets too far from other people’s thinking, no one can relate to them any more.” “Great,” I thought. “So what you’re telling me is that unless I change, I will be alone.” It wasn’t that I was trying to change or not trying to change. All I was trying to do was live my life, and I had nothing to lose except body parts. That is truly how I looked at things at the time — nothing to lose but body parts and everything to gain.

Then, I almost lost my life. I had a bad reaction to the chemo drugs and my intestines shut down. In excruciating pain, the doctor assumed I was constipated and gave me a jug of liquid called “Go Lightly,” which I drank as quickly as I could. The problem was I wasn’t constipated, so when they gave me a second gallon, my poor intestines stretched even further. I can’t say how I knew, but I just knew that within hours, my intestines would rupture, and I would die. Neither my mother nor I could get the nurses to understand. When the pain got so intense that I could no longer withhold crying, the tears only seemed to make it more difficult for the nurses to get it. “They think I’m overreacting,” I realized, “and I’m supposed to sit here and be a good patient while they let me die.” My mother knew me; she believed me. “Call Stanford,” I told her. “Tell them my colon is going to rupture and I will die.” I’d seen specialists at Stanford University Hospital, so my mother dialed them. The answering service took her message. Several minutes passed. No call back. “Call again,” I said. “You have to keep calling.” She called again, then again, and again. The doctor that my mother finally reached around 2 a.m. yelled at her for her persistence, but he heard what she was saying and within minutes I had an x-ray, a surgeon, tubes shoved in various places to vacuum away pressure, and thankfully, finally, morphine. My mother’s and my own persistence saved my life. If not for that, I would not be here.

Too often in the past, I had refused to act because acting in accordance with my gut instinct was unfamiliar and not always well received. I’d been raised by good parents to be a good person and obey life’s rules, but I was finally learning, as was my mother, there is a time and a place to say, “No.” When my intestines finally stabilized, my white cell count plunged to zero, and I spiked a fever. “This is finally it,” I thought. “Just don’t let me die alone.” That’s when I heard the voice. It said, “We are born alone. We die alone. We can spend our time with others, but ultimately, we are alone.” I’d heard the voice before. The first time I heard it, I was walking to the barn to feed my horse and was wondering what more I could lose and still be alive. It wasn’t an act of feeling sorry for myself; it was more an act of accounting.

I imagined myself as a large ball and every time I identified something that was no longer a part of me, a piece of the ball detached and went away. I had lost my hair, my looks, my stamina, and strength. I could no longer ride my bike or my horse and had stopped trying. My memory was gone. As one piece after another disappeared, the ball became smaller and smaller. Finally, what had been a sizeable ball was reduced to a small black dot. That small black dot was what remained of me. What was this tiny speck? Who was I if I was no longer the capable woman I’d believed myself to be? In my mind’s eye, I zoomed in for a closer look, and the tiny black speck became a key hole. I was drawn to look inside the keyhole. I heard a whoosh, and the other side opened up to become a vast, starry, universal sky. It was stunningly silent, peaceful, and beautiful. In that moment, I heard the voice from deep within me say, “You can never lose your Self.” I’m not sure if I was shocked, awed, or stupefied. What did it mean? When all the things I’d thought were me dropped away, I was the universe? Could I be making this up or could it be some strange reaction to the chemo drugs?

If it were true, I was not less than I’d thought myself to be, I was more. I was vast, graceful, gently powerful, and as limitless as the universe. If it were true for me, it would be true for all of us. In that moment I realized that at our core, all of us are sacred. Cancer taught me many things, but most importantly, it brought me to my Self. The message was simple, “Be real. Be who you are. Limits are illusions. You are powerful beyond measure. What other people think of you does not matter. What you think of yourself does. You may feel alone at times, but there is a wisdom that will guide you if you let it. You can utilize yourself and your life.” I know now, we are each powerful and special beyond measure. At our core, each one of us is sacred, and everybody matters.